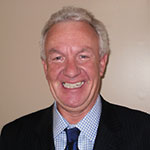 Richard born in England attended the University of West London for business management & Institute of Exports for International Trade practices. In 1980 he immigrated to Canada after serving his apprenticeship with Atlasair Cargo ( Now UPS) and British Caledonian Cargo ( Now British Airways)

Richard has since gained a wealth of experiences in global logistics having been in senior management positions for the past 28 years. Richard operated his own freight &logistics company and established his own offices in Australia, Canada, United Kingdom and the U.S.A

Richard holds designations with CIFFA ( Canadian International Freight Forwarding Association and with the C.I.T.T. ( Canadian Institute of Traffic and Transportation) for many years he was an active board member of the Air Cargo Group which served leading global airfreight consolidators until he sold his business and resigned.